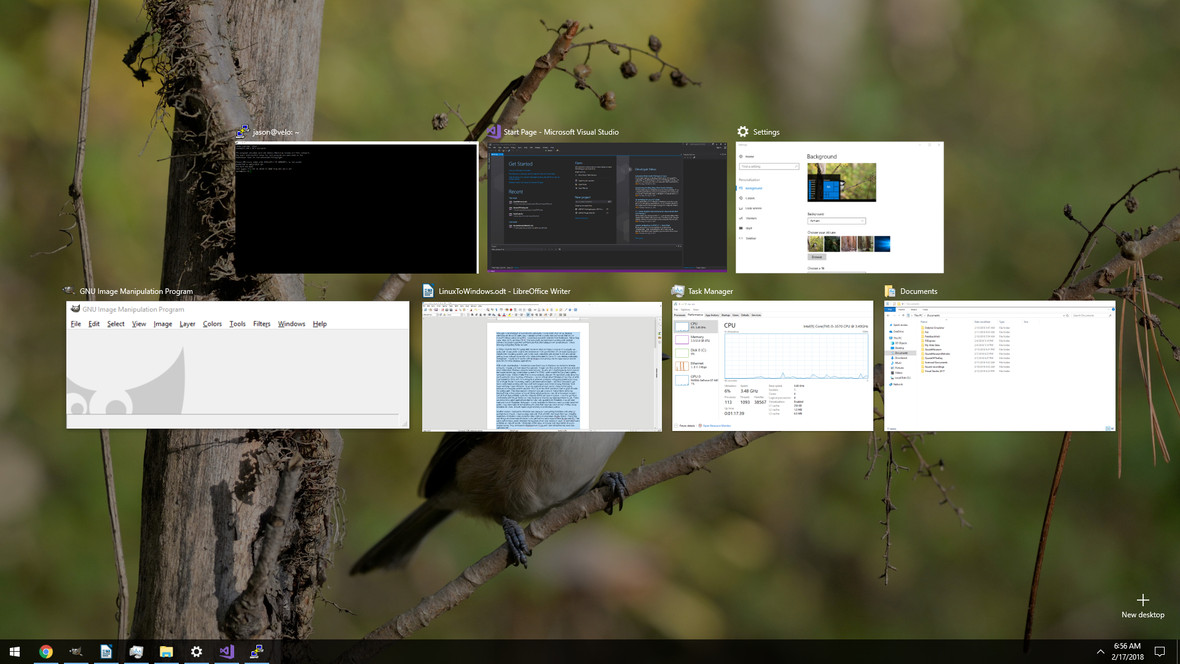 Most of the time, I have Visual Studio, Chrome, and PuTTY open.

Switching from Linux to Windows on the Desktop

Although I use Windows at work almost exclusively, I have used Linux on my desktop machines for about 20 years now. I started out with a pretty obscure version that ran on PowerPC Macs called Linux/PPC. I went back and forth between that distribution, Yellow Dog Linux, Mac OS 9, and Mac OS X. I became pretty accustomed to working with oddball software on poorly supported architectures that didn’t always work as advertised. I liked tinkering and getting things to work.

In 2005, I built my first PC using AMD hardware and ran Fedora Linux on it. It actually ran really well. It was pretty close to the experience I had running Mac OS on Apple hardware. I installed the operating system, and pretty much everything just worked. It was also easier getting Linux software since x86 is the default standard for Linux. If I was feeling particularly masochistic, I would try to run the official Nvidia Linux drivers, but the open source drivers were fine for most desktop applications.

With much consideration, I decided to move from Linux to Windows on my home desktop computer. Usually you hear about the opposite. People say they are fed up with how slow and virus ridden their Windows systems have become. So why am I switching away from Linux to the supposed bad guy of operating systems? In 2005, I worked retail and just had a geeky computer hobby. It didn’t matter that I used a relatively obscure OS and didn’t really know too much about the inner working of Windows. I knew enough about Windows to function at work. Fast forward to 2018 and I’m working for a software company writing automated tests using C# in Visual Studio. I’m making money with Microsoft products. I decided I needed to get more comfortable working with Microsoft technologies and I think running Windows 10 at home will help. I have Windows 10 on my machine at work, but it’s more locked down because of corporate security policies. Plus I’m on the clock and don’t want to goof off while I’m getting paid. The other reason I switched is to get access to Visual Studio at home. Microsoft has a free version of Visual Studio which as far as I can tell is the same version I use at Work that probably costs my company $2000 per year to license. I need to get more comfortable with Visual Studio so I can continue to improve my skills and keep my job. There are many other good applications that are also only available on Windows or are at least easier to use on Windows. Notepad++ is only available for Windows and is a really good text editor. I was never able to find anything on Linux that I liked as much as this. Fiddler, while available for Linux, is much easier to get working on a Windows system.

Another reason I switched to Windows was because I was getting frustrated with jerky UI animations in Ubuntu. I have a video card with 2GB of RAM, and it just didn’t run smoothly regardless of whether I was using the open source or proprietary Nvidia drivers. One of the nice things about running Windows is you get first tier driver support from Nvidia and ATI. The video performance under Windows far exceeds what I was seeing in Linux. UI animations and scrolling are smooth as silk. I think part of the issue on Ubuntu was their switch to a new display server. They switched to Weyland from X.org and I don’t think that has been fully optimized yet.

Boot up seems to be much faster with Windows also. Linux wasn’t terrible, but Windows 10 probably gets to the boot screen about 5 seconds faster. Linux wold usually get stuck on a gray screen, probably scanning hardware behind the scenes or trying to find network resources.

I also feel pretty secure using Windows 10. Microsoft has stepped up it’s security measures immensely since the mid 2000’s. Windows used to be the butt of many security jokes, but now, it’s pretty rare to hear about OS level security exploits in Windows. I’ve read about more open source and Linux exploits over the last couple of years than anything else. I’m also not experiencing any virus issues even though I don’t run any extra anti-virus software. The built in Windows defender seems to be just fine and doesn’t grind my system to a halt the way McAffee does with my work machine. Fortunately, I have grown up with the internet, so I feel like I can sniff out a sketchy website or scammy emails pretty well. I’m not too concerned about downloading anything inadvertently. Most modern browsers do a pretty good job of warning you about sketchy websites before loading anything too. I also take any browser or OS updates as they come. I know some people flip their shit about having to download stuff and reboot, but that is just the price you have to pay for a secure computer.

There are some things with Windows 10 that disappoint me. Getting sleep mode to work correctly has been a pain in the ass. I had to fiddle with some non-obvious settings in order to keep my machine from randomly waking itself up at night. You need to set the machine up so the mouse, keyboard, and network adapter are NOT allowed to wake your machine from sleep. I probably don’t need to do all 3 of those things, but the belt and suspenders approach has worked and my computer has stayed asleep for the past week. I also haven’t been able to set up my machine to go to sleep when I press the power button on my tower. It will work once, then any subsequent attempts to put the machine to sleep using the power button result in nothing. It just keeps running like I never pushed the power button. This is a knows issue. I have found several Windows support forum entries on this issue, but there doesn’t seem to be a solution or Microsoft’s developers are being lazy and telling you to update your drivers.

The other thing that bugs me with Windows 10 is how many elements of the OS have not been updated to match the new modern UI. On the surface, most applications have a modern look. Edge, Settings, Groove, Photos, the Microsoft Store, and a lot of the smaller system utilities have been updated and I think they look pretty good. But you don’t have to dig too much deeper in to the system before you are greeted by things that look like they were taken directly from Windows 7, Vista, or XP with pretty much no changes. The File Explorer, while it has updated icons, still feels like a Windows 7 application. The tab interface feels cluttered and clunky. Remote Desktop switches between Windows 7 shiny icons and Windows 10 flat design. Not all settings can be changed from the Settings applications and you end up back in the old school Control Panel. The device manager and Resource Monitor don’t look too much different from how they looked in Windows XP. You also have to deal with several different ideas for how to interact with an applications. Some applications use the traditional menu driven UI, some use tabs, while other use hamburger menus. All of this contributes to the Windows UI being a dogs breakfast of different application design ideas. I know they are updating the Settings application with every major Windows 10 update to include more of the functionality that was in the Control panel, but I hope they go deeper down the stack and at least update some of the UI chrome of administrative applications to make them look like they belong. MacOS also has some old software too. Since they have a more consistent UI, the fact that some of the features of the OS haven’t changed in 17 years means they don’t stick out like a sore thumb. Even the Gnome 3 UI is more consistent than Windows.

I haven’t abandoned Linux entirely. I still use it on my home server. I run Debian with Apache and mod-mono to develop ASP.NET MVC websites. I also use Samba to share and backup files on my server from my Windows machines. The server that hosts this website also runs Linux. I have no intention of leaving Linux behind. I’m just going to use it where it makes the most sense which for me is on a server. Linux without a graphical interface will happily run on an old machine with minimal memory requirements. I need Windows for work, and I was tired of dealing with choppy video second tier developer tools. Whenever I no longer need to work for money, I will most likely switch back to Linux on my desktop, but for as long as I am making money at a Windows shop, I will use Windows.

The reverse situation from what you will normally read about people switching operating systems.