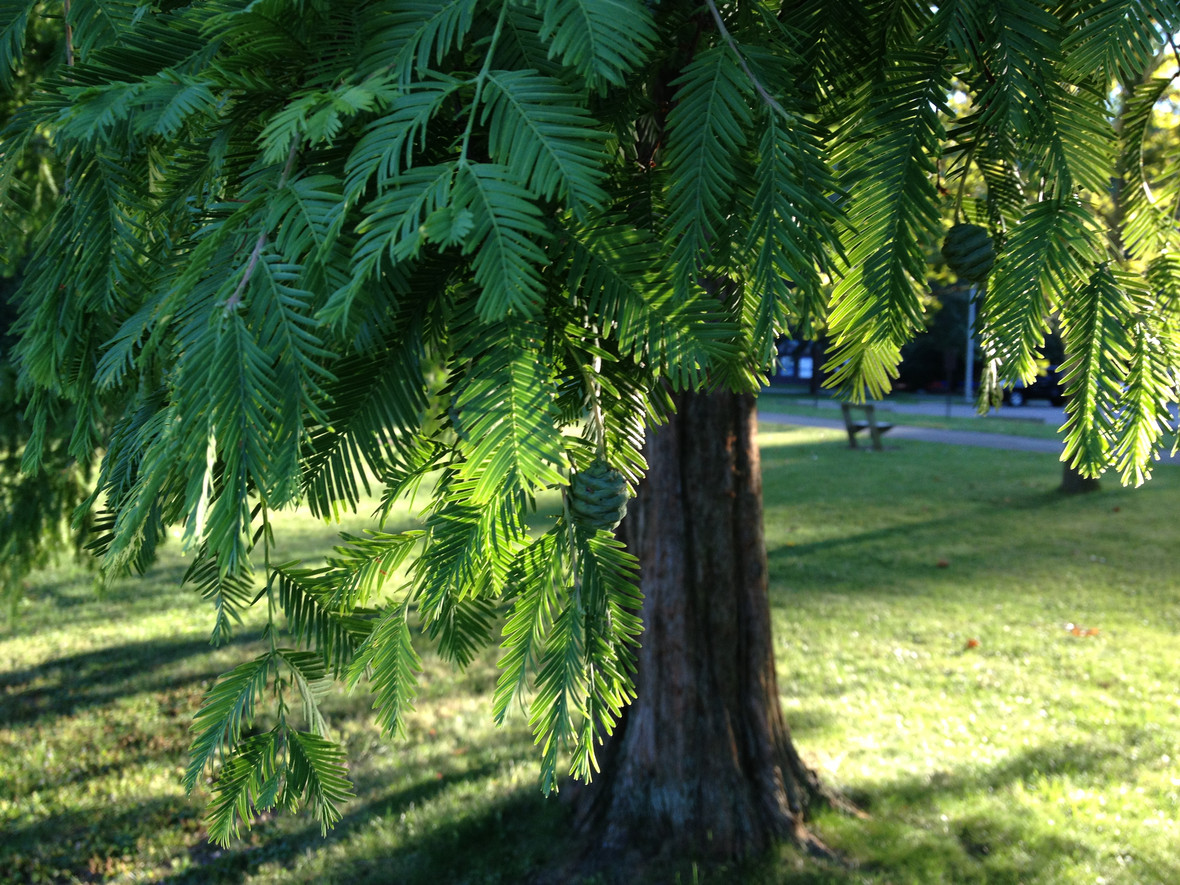 The foliage and cones of a dawn redwood near the marina in the Rocky River Reservation.

For those of you who are not familiar with conifer taxonomy, Cupressaceae is a family of trees that includes the redwoods, cypresses, junipers, and arborvitae. Trees in the Cupressaceae family represent the largest, tallest, and widest trees on earth. They also represent some of the oldest trees on earth, although they do not hold the record for age. Some members of the family have a very ancient lineage also. The dawn redwood was discovered in fossil form before a living specimen was found living in China. Amazing!

So what makes a tree belong to the Cupressaceae family? Well, that's tricky. The leaves, cones, and bark can vary quite a bit from species to species. Leaves can be fairly long needles like on the China fir or short and scale like on the northern white cedar. The leaves can also be deciduous like they are on the bald cypress and dawn redwood. Cones can be woody and fall to the ground in one piece or disintegrate on the tree to release their seeds. Juniper cones look like blue berries and are often consumed and dispersed by birds. It seems like the most common trait they share is generally shaggy bark, the ability to grow very old, and produce rot resistant wood. Some of these species are endangered in the wild because of their excellent timber properties.

Rarity is another common trait of certain genera of Cupressaceae. The redwood portion of the family only has three extant members, the coast redwood, giant sequoia, and dawn redwood. Each redwood species is classified under a unique genera. Many other Cupressaceae members are like this too. The China fir, Japanese cedar, and the alerce are the lone species in their genera. Most of these species are relictual and need very specific conditions to grow and reproduce. Their native ranges are usually relatively small. For example, the giant sequoia's native range is restricted to the western slopes of the Sierra Nevada mountains. It will not reproduce naturally outside of this range. It can also take several decades for some Cupressaceae trees to produce viable seeds. This combined with overlogging has made some of these species rare in the wild.

Trees in the Cupressaceae family can grow extremely large. The redwood portion of Cupressaceae are the current largest and tallest trees in the world. The General Sherman giant sequoia has more wood in it than any other tree on the planet. The coast redwood is currently the tallest tree on the planet. One specimen reaches a height of 379'. Western redcedar, alerce, and Japanese cedar are also capable of exceeding 200' feet in height and can also become very wide at the base. A montezuma cypress in Mexico is the widest tree in the world at 46' wide. This tree is not a single stem however. It has multiple stems that have grown together over the centuries. If you are looking for world record size trees, a member of Cupressaceae will probably hold the record.

Many Cupressaceae are capable of living for several centuries. Humble northern white cedars have exceeded 1000 years in age. This is a tree that is often used for hedges in the suburb. Coast redwoods can live for over 2000 years, and giant sequoia and alerce have both exceeded 3000 years in age. The only single trees that have been found to live longer are the bristlecone pines which can exceed 4000 years. To give you some perspective, most trees only live for two to three centuries under good conditions. While Cupressaceae cannot boast having the oldest trees, its members are capable of outliving most trees by several centuries.

This is one of my favorite families of trees. I'm really attracted to their ancient lineage, superlative stature, and beautiful foliage. They are rare and unique trees that offer a glimpse of the past. They are also very highly adapted to their environments and can be very sensitive to climate change. If you want to learn more about these and other conifers, check out the trees category on my website.

Have you ever wondered what the tallest tree in the world is? The widest? The most massive? Then you need to learn about this family of trees.