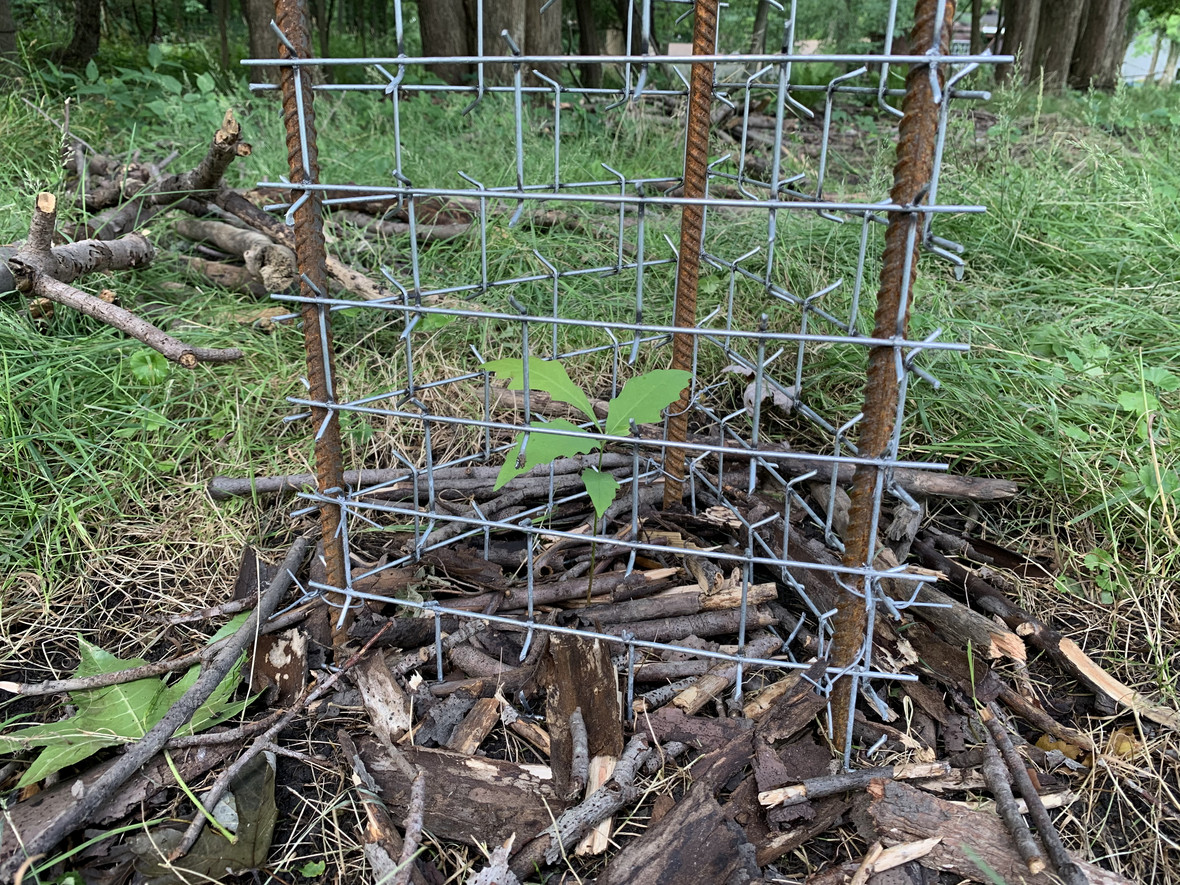 I have caged in 3 oak seedlings to prevent them from being eaten by deer.

For the last month or so, I've had a bunch of oak seedlings sprout in my yard. They were probably planted by blue jays. They often stash acorns for the winter in the ground. The ones they forget about usually become new oak trees.

I tried to mow around the seedlings I wanted to let grow, but that didn't last long. Deer found them and ate them pretty quickly. Sometimes they were eaten within hours of me finding them. To prevent this, I decided to fence in any future tree seedlings I wanted to let grow. I found a product called Arbor Shield. They are essentially spiky fence panels that keep large animals from eating your trees. If they try to eat your trees, they scrape their face on pointy metal. To assemble them, you pound 3 pieces of concrete rebar into the ground and attach the panels to them using wire. Forestry Suppliers, the company that sells them, included an envelop full of pre-cut metal tie wires. I had more than enough to get the 3 enclosures I bought built with enough left over to redo them or repair them in the future.

You need to wear gloves when constructing the enclosure. The spikes are sharp. I took off my glove a few times to get better dexterity while twisting the tie wires and I scraped my knuckles on the tines several times. I'm not blaming Arbor Shield for this. The fence is doing what it is designed to do. It's more of a warning for anyone else that is interested in buying and installing them. Wear gloves and wear them as much as possible while assembling them.

The oak seedling seem to be doing ok. I think they are pin oaks, but it's hard to tell at this point. Oaks in the red oak family have kind of a generic looking oak leaf when they are seedlings. I strongly suspect they are pin oaks because that is what grows around me natively and grows very well. There are some massive pin oaks around my neighborhood. I hope by the end of the growing season the leaf shape becomes more pronounced and I can get a definite identification on them.

My ostrich ferns are looking a little rough this week. We had a 4 day stretch with temperatures over 90F and no rain. I watered them every other day, but two of them had some fronds turn pale and die. They do get some direct sunlight in the afternoon, which probably isn't helping.

I also found out the type of fern I thought was an ostrich fern in Bradley Woods, the forest I am modeling my forest restoration after, is actually a New York Fern. The fronds of the New York fern are very similar to the Ostrich fern, the way the fronds grow is different. New York ferns grow in colonial clumps and lack the almost funnel shaped cluster of leaves that ostric ferns have. I'm trying to see if I can find a local source of them, but I'm not having much luck. It doesn't seem to be something nurseries carry. I'll probably have to order some bare roots from someone on Etsy.

So I hopefully have a 3 new oak trees growing in my backyard, my ostrich ferns are looking a little rough, and I found out the ferns in the park are actually New York Ferns.

I have some new trees growing and my ferns look bad.