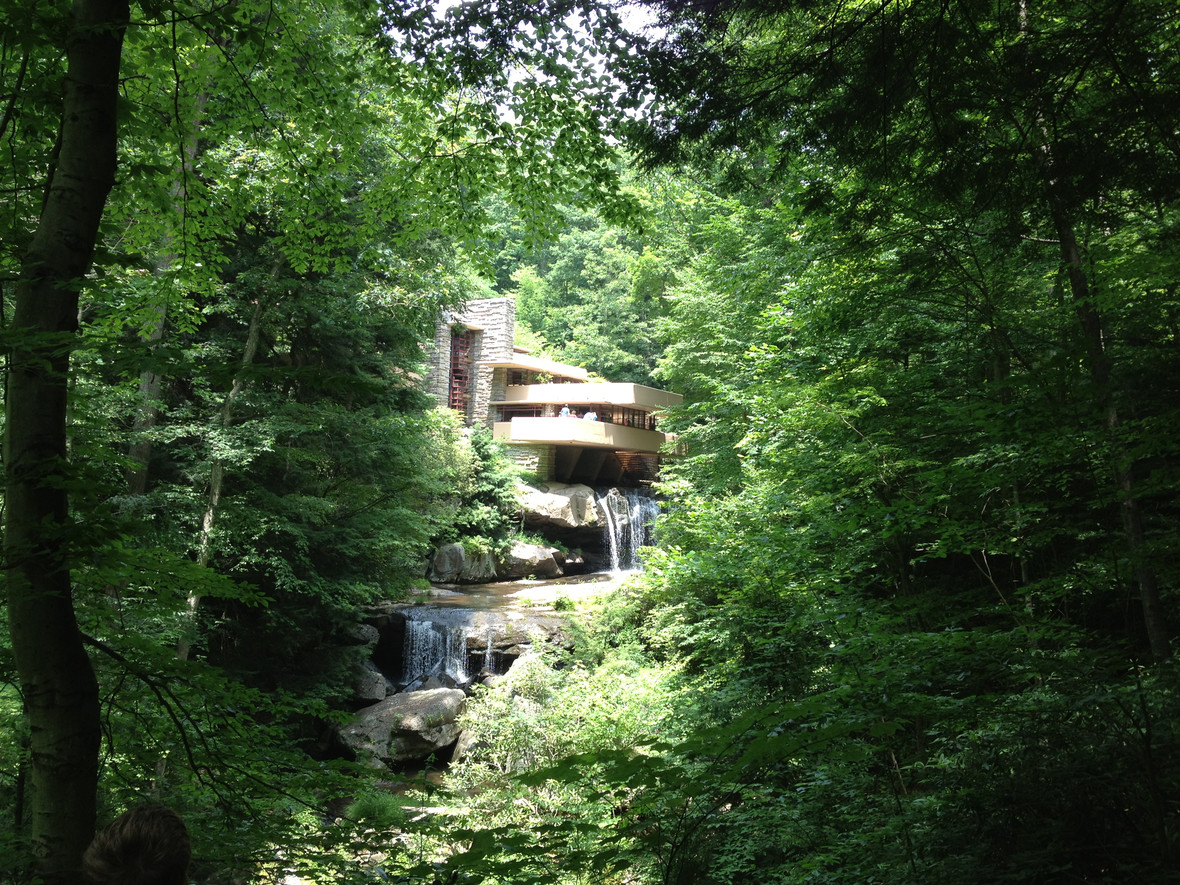 I was honestly disappointed by Falling Water. It was crumbling and alot of the interior looked dated. It has not aged as gracefully as Mies's work.

I had the opportunity to visit Frank Lloyd Wright's falling water over the weekend and I cam away with mixed emotions. There were things I really liked, but there was a lot of stuff that I didn't like.

I'll start with what I liked about the house. Aesthetically, it is a very pleasing house from the outside. It really does blend in with it's surroundings well and it is dramatically placed. Wright did a good job with this aspect of the construction. Walking through the house and seeing the interior makes alot of mid century modern architecture make more sense. The seemingly irregular masonry bricks in Falling Water were obviously copied by later architects for the fire places and exterior stone work in may 1950's ranches.

Much of what I didn't like about the house was what I didn't like about the architect himself. His refusal to work with his clients until they threatened to end the project was apauling. Edward Kaufmann, the founder of the Kaufmann's department store chain, hired engineers after he saw the plans for the house to see if Wright's idea to cantilever most of the house over the Mill Run stream was even feasable. They came to the conclusion it was feasable: But only if a significantly larger amount of reinforcement was used. When Wright found out about this, he wrote a nasty letter to Kaufmann. Kaufmann wrote one back, but being the more diplomatic of the 2, salvaged the project. The fact that the purchaser would have to fight with his architect about the structural safety of his home is apauling. Even more so when one considers the reinforcement isn't visible once it's covered in concrete.

The amount of structural reinforcement added after this argument still wasn't enough. The terraces of falling water have been sagging since it's construction was completed. In 2001, major repairs were undertaken to stop the terraces from sagging any further. They weren't able to correct the sagging, but they were able to stop it and make it safe for visitors. This is another thing that bugs me about Falling Water. It's not a solid structure. The terraces sag and there are visible cracks all over the concrete. Concrete cracks, but Wright's lack of foresight and unwillingness to go back to the drawing board, I feel is laughable. I would want to put my name on a house if I knew it was going to collapse after a few decades. If Wright was as great of an architect as he made himself out to be, he would have taken into account the durability and appropriateness of his materials for the project at hand. I feel like was trying to force concrete and stone to do what it wasn't supposed to do.

The details of the house bothered me too. Wright built to his own Lilliputian scale. Wright was only around 5'4" tall. Most of the doorways are only 6' tall and many of the ceilings aren't much taller. That would be great for his own personal residence, but it's a big middle finger to most normal sized men. I spent most of my time crouched over in falling water and I was fortunate not to bang my head into any doorways. What would possess a man to force other people to bend to his will. It's like carpeting the earth so you don't have to wear shoes.

Other details that bothered me were the build in furniture. He built desks, tables, shelves, and couches into the walls to preven pepole from putting furniture where he wouldn't want it. Some of it wasn't even that well build. Many of the shelves he designed sagged in the center. He put aesthetics over functionality and that is not design. The most beautiful object in the world completely invalidates itself it it does not serve the function at hand and do it well. I think that may be my biggest issue with Falling Water. It's a beautful object to behold, but as a far as homes go, it's piece of junk. He ran roughshod over the safety of his clients, didn't take into account everyday needs that would make them comfortable, and had the audacity to throw a tantrum when he was challenged about them.

Falling Water is a beautiful object in the woods, but it makes a lousy house.